I caught up with our client Yolande Henebery after she had been to the private view  at the Red Propeller gallery in Kingsbridge, South Devon which features her ‘Liquid Mistress’ work.  ‘The exhibition featured many artists with their own interpretation of what Borderline meant to them, and included the Actor and Artist Connor McIntyre also know as Coronation Street bad boy, ‘Pat Phelan.’ 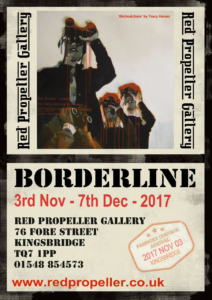 Yolade creates images painting with collage, building layers of texture, incorporating memorabilia, discarded stuff, creating  a poetic function whilst capturing memories. She uses inks and pen detail enhanced with pencil, glitters and fabric to sculpt the objects that she loves and collects.  She says: ‘Collage is like putting a disrupter into the mix, a means of disrupting intention by chance with a randomness and the conclusion never fully anticipated.’ 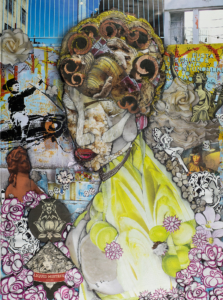 About her piece Liquid Mistress at the Borderline exhibition she says:

‘Liquid Mistress encapsulates women damaged and represented in different dimensions, the iconic, the Imperialist symbolised by roses, simulating tradition, the ‘naughty,’ the ancient, the vintage and the ‘liquid mistress.’ It studies the form, the torment whilst celebrating the success of women through the ages. ‘She’ has more than one personality, a position between two conditions or qualities, the borderline between friendship and love and the balance between well-being and mental health. Borderline is her conscious expectation of being the symbolic female and her psychological battle with the expectations of her role and the struggle with the boundaries of expectation and acceptance.’